Hi all! State Masters Track Championships happened this past weekend with great memories and accomplishments! Arden Arindaeng racing for South Bay Wheelmen competed in the 40-44 age group Match Sprints during the day and followed by Team Sprints later in the afternoon. His Flying 200 meter Time Trial for the Match Sprint seeding didn’t turn out that fast and was not of importance since there were only 8 people who registered which automatically made them all qualified for the event. He closely won the quarter finals against a stocky muscle-built sprinter Michael Hulse but lost in the semifinals against Eric Manuel, this year's overall winner of the Bob Hansing Memorial Series 40+ Category. This meant competing for 3rd place which happened to be against Tony Zaldua, Wilson Blas’ teammate. Arden was so happy to win this race convincingly for the Bronze Medal! Here's a few pictures at the starting line: (top) against Eric, next photo against Tony Zaldua. The third picture was the Match Sprints awards. 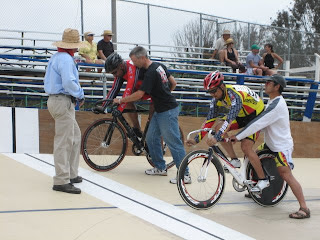 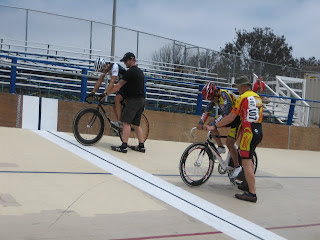 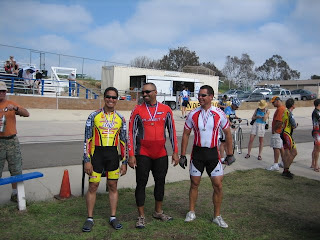 Later in the day, Eric Manuel, Paul Avila, and Arden signed up for the team sprints and they named their team “Team Effort”. It was a hard 3 lap sprint as they only lost half a second to the second place team and a second from the fastest team! Arden was the 2nd sprinter in their arrangement. Not bad since they didn’t have a chance to practice together! Here's a pic of the Team Sprints awards. Next is Arden just showing off the 2 bronze medals he won. 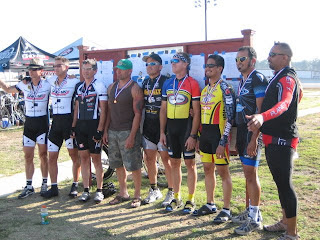 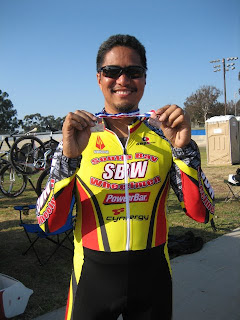 The whole Meatheads and a few South Bay Wheelmen where there Saturday and Sunday, competing and raking up the medals. It was hectic at first and busy throughout the day. But they had a great time and even joked around. Overall, it was a good experience and a weekend to be cherished especially that his wife Trelly was there for the inspiration and his much needed assistance. She also took pictures and videos! 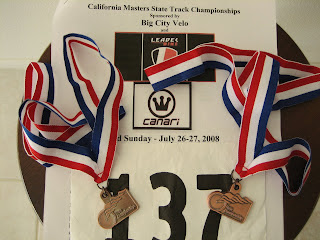 Here's the trophy from Encino Velodrome's Bob Hansing Memorial Series together with the State Masters Medals... 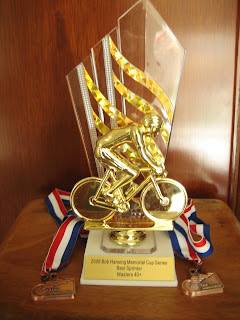 You can check more pics at picasaweb.google.com/adobovelo

Next in the agenda is the upcoming ADT Championships and then at San Jose, California for the Masters Nationals Track Championships. Wish him luck!