That was a great scenic ride. Weather was perfect.

Six Duarte Boys did something new, by getting on the Rio Hondo bike trail from Myrtle Ave on Monrovia/El Monte. It connects to the L.A. River Bike trail. Meanwhile, 14 Liberty Park Riders did something new too, turning NORTH on PCH toward Long Beach (instead of the usual South toward Newport) to meet up with the Duarte Boys.

Liberty rider Jonas was our navigator in the morning. He wanted us to avoid riding on the supposively sandy bike path in Long Beach. So we rode along where most people would drive when they want to go site seeing.
Took a few pictures at the Aquarium. 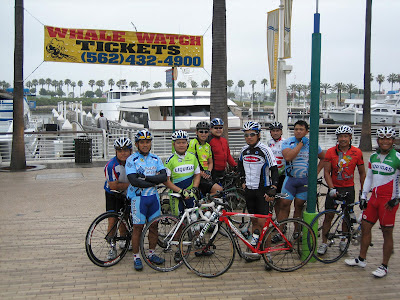 Then the big 20-person group raced south to Long Beach. It was a fast pace.

We regrouped by the Aquarium of Pacific. We chitchat for a bit and headed back toward LongBeach. Aaron also caught up with us from Liberty Park.

Either the Testosterones were brewing all around or everyone was on EPO.. The speed picked up from 18-26mph..Roy was pulling with headwind. All I remember was I attacked on an upcoming hill,Francis shouting DARNA!! got on the side of Roy and was neck to neck with him on the climb while both of us off our saddles.. Then I found myself in the front of Roy gasping for thin air, looked at my garmin and HR showed over 200bpm.. Slowed down to recover while everyone pass me like I was standing still BooHoo. 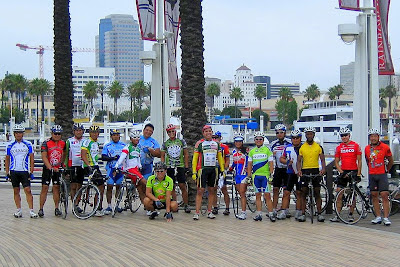 We regrouped and took a few pics at the Aquarium of the Pacific. It was much safer riding on the bike path along the beach. It wasn't sandy as originally thought it would be, but you couldn't go much fast than 17mph. Scenic route through Belmont Shores and to Downtown SealBeach for Coffee Break. 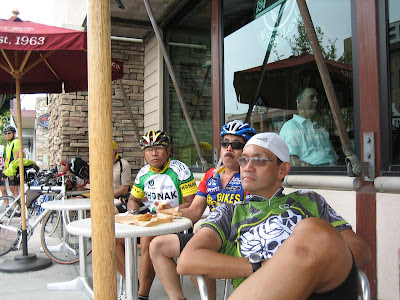 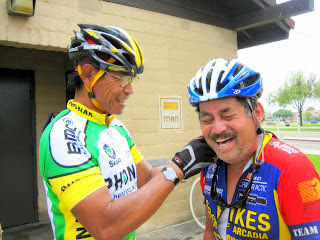 Then we all met up again at Liberty.

That's where Ricky realized his helmet strap wasn't buckled. We all know the helmet is no use, unless it's strapped.

Need help with that Rickyboy?

Thanks for the great ride..

Awesome job Duarte Klans..next time we will all do the Duarte LOOP route.. Until the next ride to MT. WILSON...Keep on riding and climbing..

DARNA aka ADOBOChic
Posted by Rosalie (DARNA) at 9:17 AM