Japanese love to bet on sports. In 1948 they were rebuilding their country after the war. They liked the American invention of greyhound racing, 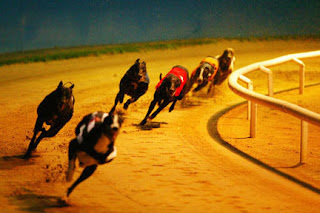 in which the dogs chase a mechanical rabbit around a race track. But greyhounds were expensive in the period after the war. Besides, the Japanese did not know how to train them yet. But one thing they had in abundance right after the war were unemployed men. So, someone had the bright idea to put them into bicycles and race them.

So in place of greyhound dogs, they used Japanese cyclists, and in place of a mechanical rabbit they used a motorcycle pacer. And so was invented the cycling event of “keirin” as a betting sport, in 1948.

It’s a cycling race held in a velodrome, in which cyclists chase a motorcycle until it drops off, then the cyclists race on their own. 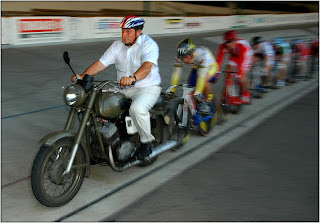 Velodrome is French for cycling oval; Modern ovals are indoors, wood-floored, and have inward-sloping turns to allow faster speeds. In the olden days they were simply converted horse-race tracks or track-and-field tracks with cement surfaces and un-sloped (and therefore dangerous) turns.

Arden ventured out of town again in the last week of June 2008 to do some keirin training at the San Diego Velodrome. 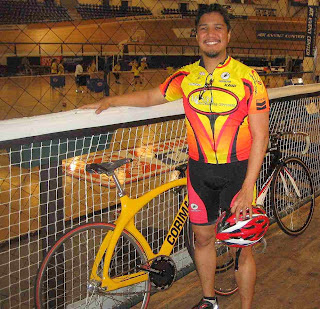 This rough velodrome is 83 meters longer than LA's velodrome (photo at leftt). The training was harder than a spinning class beyond imagination. Arden not only “ran out of gas”, but “blew out his engine”. Arden says his “whole upper body was screaming for air, but the coach told me to get it to the finish line. Somehow I did”.

Now he knows what those greyhound dogs feel.

Then after the kierin training, the next day he rode with the great folks of MMCC (Mira Mesa Cycling Club) up Del Dios.

The keirin training has 3 sets, all paced by a motorcycle.

The first set is the slowest, a “3-lap” sprint (done twice, with a slight recovery in between).

Finally, the third set is the fastest, with a wicked and violent one-lap sprint (also done twice).

All sets have “flying starts”, meaning, the rider gets behind the motor pacer who sets a pace that’s progressively faster than the previous lap.

This was Arden’s first time doing this type of interval. He was sort of was out of sync, but nevertheless survived the first and second sets.

The third set was a different story. He thought would recover enough for it, but no. Before the start of the third set he was still light-headed, dizzy, and nauseated. “I think I was feeling worn out from the whole day of packing and travel “, was his excuse. Anyway, like a zombie he forged ahead, got on his bike, and reasoned that this suffering would be over in less than 15 minutes. “Nothing to worry about!”, he thought.

Remember, it’s a 1-lap sprint, which he has to do twice (with a short recovery in between).

He finished the first sprint strong.

But in the second sprint, he was in the wrong area of the track, so he had to spend extra energy to get behind the motorbike who must be going 30MPH. With a third of a lap remaining, he BLEW OUT!

His upper body was screaming for air, but he managed to obey the coach’s orders to get his ass to the finish line. Arden recounts that he was “dizzy as hell and really wanted to throw up. Maybe I was ready to black out! But no worries, I recovered somehow. “

He got a good laugh from his coach Mark and his other 2 trainees, Kevin and Shawn. “I tell you that gave me a new meaning of threshold! “ says Arden.

The Omnium they have is on the 12th. I'll make it a point to be there the day before, and sleep at my relatives house. With that, I'll be fresh for the race! Thanks Arnold!

There's a race this Saturday at Encino and I had no choice but to show up, race hard and earn the trophy! Wish me luck!
Posted by AdoboVelo Wire Service at 8:01 PM