Another awesome summer sufferfest ride. This time to Mt. Wilson. Approx. 57 miles and around 6500ft of climbing. Some have trekked up to Mt. Wilson via same route, and others conquered it for the first time knowing there will be food provided at the end. We had two choices, either go the long route, from Angeles Crest Hwy to Angeles Forest, to Upper Big Tujunga to Red Box to Mt. Wilson or the short route, Angeles Crest Hwy to Red Box to Mt. Wilson. Legstrong even printed out the route sheet and showed a few riders the route. Someone asked, "So where are we climbing?" We looked at the sheet and EVERY TURN WAS A CLIMB. We where laughing so hard. 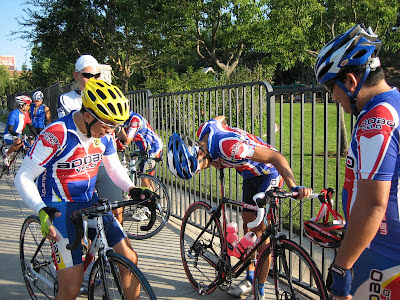 Once we started riding, Jess aka SpeedyBagal would sprint to the front just to take pictures and videos of us riding or climbing. With his burst of speed, he was riding like he was on EPO. He kept stopping and going. Thanks Jess.
I rode with Abe Agimat aka Kumander for the first couple miles. Before the Crown Valley climb, he kept saying to me, "We are going to have our breakfast now." I said, " Oh no, this is just our first morning cup of coffee, a teaser before breakfast. Breakfast is along Angeles Crest Hwy and Angeles Forest. Toasted bread is after doing Upper Big Tujunga". 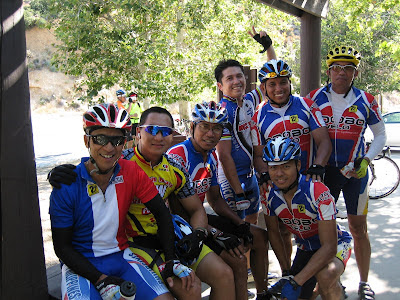 Ya, we were TOASTED all right, after climbing upper Big Tujunga. I even ran out of water. Thank goodness most of the riders stopped at the End of the climb to rest and I was able to bumb off water/heed from Ryan and also Francis during the climb.
All refueled at RedBox before the climb to Mt. Wilson. A few took off their bike shoes, a few laying down to rest, a few just stretching out their sore muscles like myself, and a few had a daze look on their faces knowing we still had 5 more miles to climb. Once pottybreak was over, we all trickled our way up to Mt. Wilson. A few stayed behind because they were TOASTED and most had their one last CAFFEINE LOAD or V8 and were ready to go again.
Once we got to Mt. Wilson, we saw the Los Brutos riders, who did the short route. Adobo Kuya Ricky was also at Mt. Wilson. Unfortunately he was 1 hour late and had to take the short route as well. The SMOG view of LA was awesome but not as spectacular as the Gigantic Antenna Towers. Why else would you climb Mt. Wilson? answer: to take pictures by the ENORMOUS ANTENNA TOWERS. 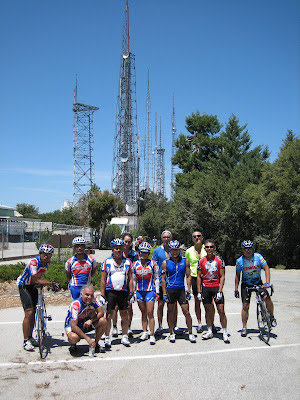 There were a few riders missing who trekked ahead. To find out later back at RedBox, Legstrong, Wilson, Timothy and Mandy climbed extra and were underneath the Gigantic Towers. Awesome job guys. 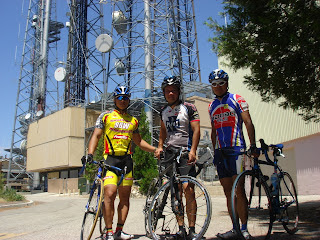 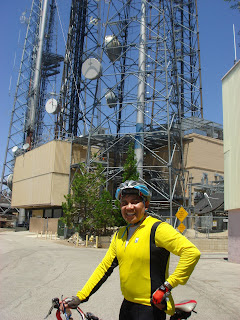 The descend back on Angeles Crest Hwy to the park was Fast, Furious and Sweet like Fresh Strawberries on Pancakes. Once you start eating them, a minute later, they're long gone. Riders at the front pack had NO FEARs of going furiously fast. I mean FFFAAASSSSSTTTT.. Like they didn't have their strawberry pancake and fasted all day and can't wait to eat.
Everyone made it safely back to the park. Quickly racked up their bikes, freshened up a bit, and off to the park table to do some more attacking. Attacking the Pizza, Buffalo Wings and Cold Refreshing Drinks. Thanks Francis for providing the food and drinks. 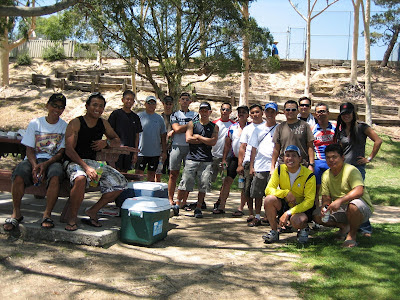