Nice day to ride where the temperature @ 0800 was to be in low 60's and highs of about 82 degrees at Mile Road Park in STOCKTON. Among the participating teams/group that I recall seeing were TRACY, LUZVIMIN, TROPA, F.A.C.T., SIKLISTA, SIKADS and us “D 5 ADOBOS “: EL, DEO, AL, RONEL and MYSELF. (Not in age order). Here's :ouie mixing up with our Norhtern counteparts. 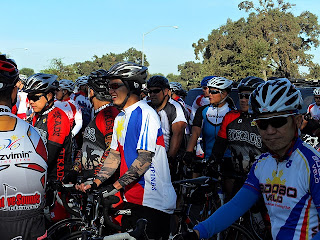 We rolled out shortly past 0900 after a brief introduction to the teams, Astigs and silent prayer. For the first 20 miles, everybody was pretty much together and not surprising to see the road to be so smooth, flat and it almost looked like it was swept the night before just for the event. In spite of it, I heard of one incident of possible B.C.B. that must have occurred on the second 20 miles. The group was divided after the first 20 miles with the first group being able to withstand average of 25 miles/hour as it was announced. Of course all the ADOBO Velos were there but I had to carefully hide from the wind, not knowing the course and unexpected surges that may arise. By this time arm warmers, knee warmers and wind breakers are off. I started to feel the heat too… the heat from the speed!!!!! Here's a pic from the park with the ADOBO Velos. 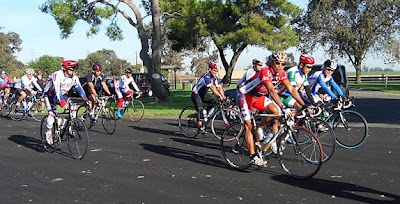 I recalled reading the cyclometer of 47 miles after the second stop thinking that there is only over 15 miles to go but I underestimated it because at the end it was a total of 68+ miles. At the end we are proud of Deo to take the sprint showing how to get a top speed of 40 miles an hour. Don't ask him the chain ring/cassette combination cause he won't tell you. It’s proprietary.

Back at the park roughly 1330 and by now recovery nutrition is ready and I could feel my blood sugar is low and getting lower by the minute. Frank Gatula, wife Salome, and the whole organization of Luzvimin and everybody who helped make this event possible. A BIG THANK YOU! We had raffles too and I even scored a cycling cap with a VELLUM water bottle. El donated a nice watch, only for someone to pick El's own raffle number. He ended giving the number to Ronel who received the item from "Sir Maui" and I believe the item ended in the fast hands of George (son of Maui). That’s the end, I heard. Six hours of trip back home thereafter, well worth it.