Our Friday went like this, while Francis dragged the guys, Kuya Ricky, Vince and Manny at 5:45am to drive to Trona Death Valley for their Century Ride supported by Francis himself, Pete and I carpooled and left at 9:30am to go sightseeing at the ghost town of Rhyolite in Death Valley. The view of the valley in Beatty was incredibly clear.. The drive to the road leading to the Goldwell Air Show Museum was about 1/2 a mile away from the highway. 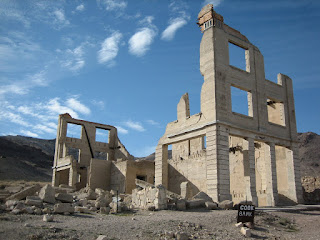 It gave a sense of time warp, back in the cowboy era, like the movie "the good, the bad and the ugly". Reality hit me when I saw a few cars driving the opposite road. While the guys were grinding up on Towne Pass, 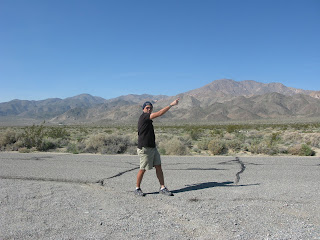 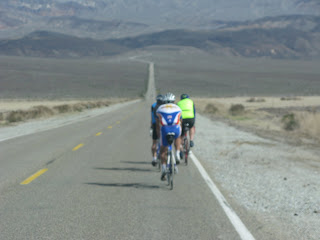 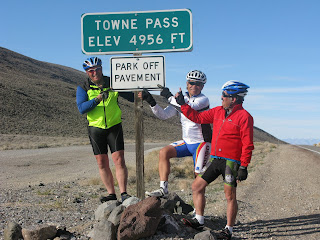 Pete and I were taking pictures of the ghost like white shrouded statuettes of the Last Supper sculptured in 1984. Made out of plaster and to weather proof, coated with fiberglass. 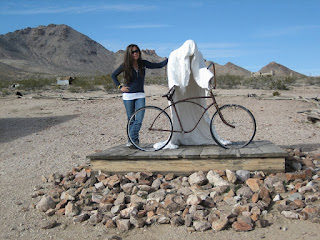 I have always wanted to see the Last Supper. Driving through the ghost town was very eery.. I definitely wouldn' t want to be there during the dark or night. The statuettes might come alive.BBBooooo!!!! AaaaHHHH!!! 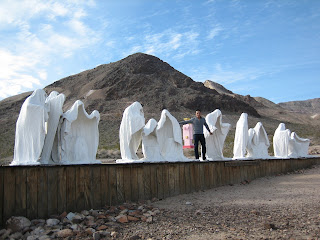 We then left and drove towards Stovepipe Wells. We thought maybe we will be able to see the guys, but, no sight of them yet. We finally got to town, checked in our bags and bikes and calculated what time the guys might get to Stovepipe. Since it was almost 5pm, we decided to head towards Furnace Creek. About 1/2 a miles into the drive, We saw a familiar truck (kuya ricky's truck) and 4 guys on the side of the road.. It was THEM!!! They made it. They were close to the Sand Dunes. Kuya Ricky's was standing behind his truck, his head was slumped on his back truck bed door as if he was ready to hurl (throwup, upchuck)..Nope...It was his knees giving up on him..He said "That's it! I'm done" I gave him a hug and said "Congratulation's Kuya Ricky, you redeemed yourself." They rode 78 miles. 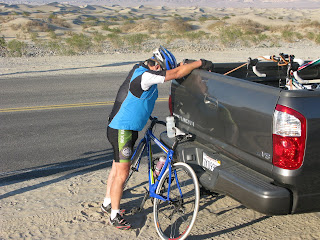 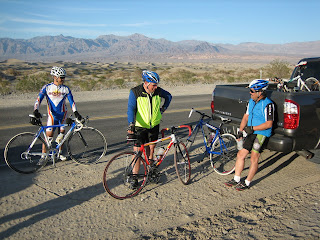 Both Kuya Ricky and Vince called it a day but Manny on the other hand, was still feeling fresh and decided to ride all the way to Furnace Creek with 2 personal SAG support vehicles. He said those Powerbar round blocks Francis was giving out gave him so much energy, he had to finish the ride. 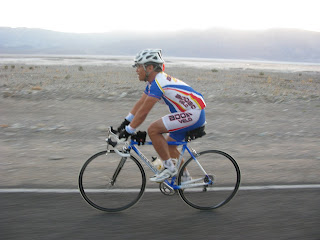 Manny arrived Furnace Creek in the neck of time before it got really dark. He was so excited to get the ride done, he was even thinking about maybe doing the double on Saturday. 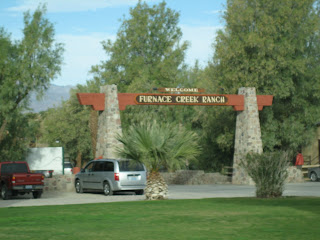 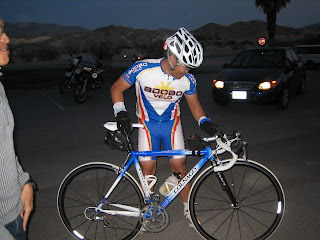 We all had dinner at Furnace Creek. Post ride recovery food for some and carbo-load for me, Pete and Francis. 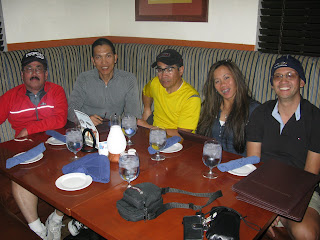 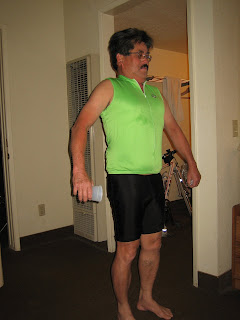 Kinda cool, everyone were going back and forth from one room to another. Francis slept like a log on his bed by the window, he was out like a lightbulb. Pete on the other hand, slept on the floor, took a sleeping pill to get his good night sleep. As for me, tossed and turned for abit while the TV was still on but yet had a pillow over my head. I said to myself "this is useless". Got up, turned the TV off put 2 pillows over my head because I didn't know where the snoring was coming from, either the double cent room or the friday riders room.
We woke up at 4am, ate, donned our Adobokit, put our gears and bike on my car and drove to Furnace Creek.
We were in the second start wave, 6:10am. 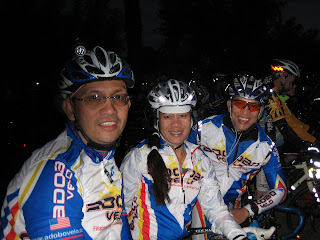 There were lots of riders eagered to start. But the volunteers controlled the wave starts pretty well. Once we took off, slight climbing began. The pace was slightly faster than I anticipated. That was okay, since the first stop was at 17miles (badwater). Hung with Francis and Pete but once another rider passed us, a chase began by Pete and there goes Francis as well. I said to myself "DAMN.. If this is the way it's going to be all day, I'm not going to finish the ride". I stucked to my plan and just stayed with a group of riders with a doable pace and drafted and conserved.
The Volunteers for AdventureCorps are awesome, the best. Roving Vehicle with a loud speaker playing an upbeat music would go up and down the road.. The volunteers at some sagstop would take your bike from you while you refuel. It was like a bike valet service. It was great. Each sagstops had tons of food, beverages, ice and hammer products. 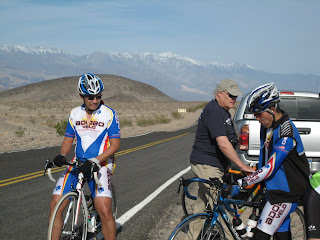 Major climbing began at mile 45. Francis and I rode a comfortable pace total of 20 miles of climbing with a downhill break at after 10 miles of climbing. Pete on the other hand didn't want to stay on his saddle too long so he would take off, sacraficing his legs to save his ass from hurting. We would regroup at each sagstop.
While still climbing at mile 60, up ahead coming from the opposite road towards us were a few riders stretched out coming back from Shashone. They flew by going what felt like 50mph. Tucked so low, all I can see was the bike. It was Michael Emde, who flew by first (2009 508furnace creek winner) and other riders following him behind. I looked at Francis and my mouth dropped. They have already done around 95miles and we were still climbing at 60 freekin miles.. Shook my head and I said to myself "I guess they will not be needing any night lights since they will be back at furnace creek while the sun is still high".DANG BULLET FAST RIDERS!! 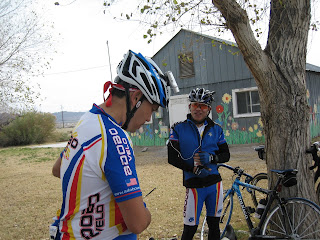 After the Sagstop at Shashone, climbing began again. Climb, climb, climb was what I remember from this ride. We caught up with the tandem riders George and Brandy donning an everest challenge polko-dot jerseys. Climbed along with them for a bit while Francis and Pete took off. They were telling me how tandem riding is much much harder than solo riding. Coordination, compatibility, concentration, balance and patiences are what you need to have to ride a tandem. Once in a while George would do a count down and he then would say up and they would be off their saddle in syncrony for I would say about 10-15 pedal strokes until they sat down again. Climbing on a tandem is hard , anyone can catch up to a tandem on a climb, but when it comes down to DOWNHILL, make room because they can descend faster than Michael Emde over 50mph.. SCCAARRRYYY!!
We regrouped at mile 100. Did the usual, fill up water bottles, get food, use the bathroom and then take off. The problem I had after this sagstop was forgetting both my waterbottles!!!! I didn't realized it until my watch timer went off (goes off every 10mins to remind me to drink) looked down and "What the @#$%??? I forgot my water bottles." Luckily I was still behind Pete and Francis. I told them and they shooked their head. It was awesome of them to give me each of their water bottles.
At this point Pete like always, didn't want to stay on his saddle so he accelerated along with Francis and I tried to hang on with them. I remember William telling me, "At each sagstop, you eat and then ride comfortably so you don't get a side stitch" Well, that Sidestitch creeped on my side to the point where I couldn't hang on with the guys. Slowed myself down and rode with a group that was behind us. Once my sidestitched disappeared, I took off to try to chase Pete and Francis. No can do.. They were too far.. I found myself riding by myself for over I think 15 miles. Lunch stop was at Badwater. Francis and Pete got my waterbottles from the volunteer. Francis gave me a lecture like I was a little kid. Lesson Learned.. "Focus and prioritize yourself" he said to me. This is where we would pick up our headlights. Francis gave me 15mins to eat and to set my lights. So that I did. We then took off and rode together. 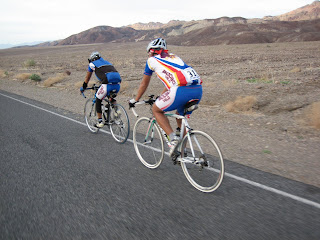 This time at a much comfortable pace since we stuffed our faces with Subway sandwiches. Rollers and lots of them at this point of the ride. A problem came about when I noticed my headlight was wiggling from my handlebar.. DAMN.. I lost the screw from the clamp. I thought I tightened it well but I guess I didn't. Told Francis and he shook his head again.. I felt stupid at this time.. "What the heck is going on with me, first my water bottles, then a side stitch, now I can't use my lights.""AARRRRGGGhhh.. LUCKILY I had my other backup headlight I had from the morning that I didn't use..WWHEEEWWW!!!
We got to Furnace Creek mile150 at 5:50pm. 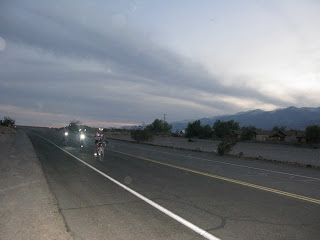 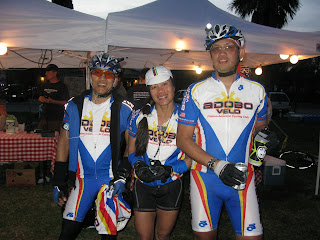 Francis told Vince that we would arrive there around 6pm. It was great to see Kuya Ricky, Manny and Vince. They just got done sightseeing at Ubehebe Crater and the surrounding areas. 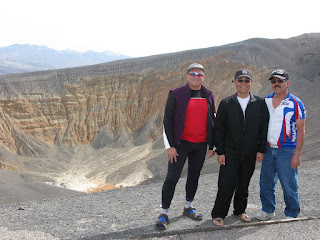 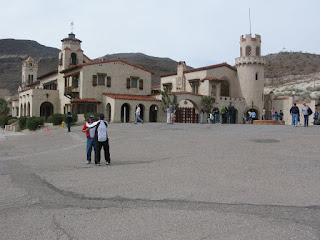 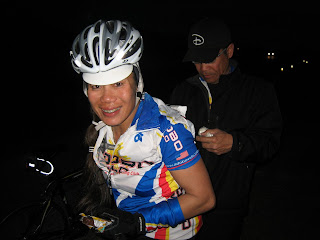 They would say "what do you need, I'll get it for you, let me hold your bike, I'll fill your water bottles for you, what else do you need" WOW what a treat.. The only NONtreat was seeing the first finishers like Michael Emde and other bullet fast riders lounging around comfortably on a grassy area and finding out they have been lounging around for a couple of hours. And there we were at Furnace Creek with 50miles to go. I didn't let that get to me. 25 miles to StovePipe get my coke and cup-noodles and then turn around 25 more miles and Walla DONE.!! It was the darkest ride I have everdone. No moon, pitchblack but AWESOME. I found myself stargazing. I loved riding at night. I didn't know what was up ahead so there was no hill Anticipations, why? because you can't see them ahead, too dark but you can feel it on your legs.
The last 25 miles felt like I have only been riding 50miles. My legs felt great. I was on my big chain ring most of the time.
We got to the finish at 9:40pm. We did the last 50 miles in 3hrs 40mins including stops. We were greeted with the Cow Bell Rings and a Shoutout by the Volunteers "Great Job!!" and by Chris Kostman "Great Job ADOBOVELOS!!!"
Pizza and sodas awaited but I only had a couple of bites from Pete's Pizza. At this point, I couldn't think anymore, the rest of the night was a fog. The restaurants were closed so we headed back to Stovepipe and ate left overs. Had a good night sleep and then took off the next day.
We caravaned to Badwater. 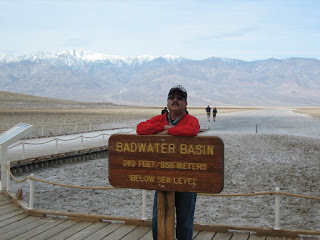 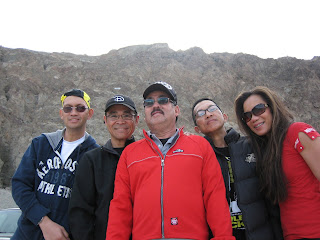 Took pictures and drove the route all the way to Shashone. 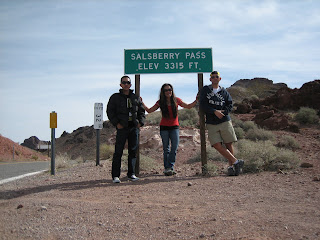 Had lunch at the Greek Restuarant at Baker and celebrated Kuya Ricky's birthday. Lunch was on him. Thanks Kuya Ricky. 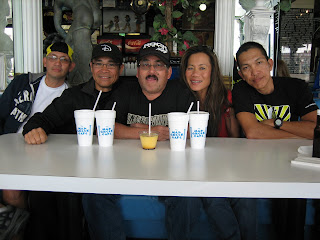 Great hard double and to top it off, a weekend spent not only with great riders but great friends.

-ROSALIE
Posted by AdoboVelo Wire Service at 8:45 AM