There were four of us, Rosalie, Mandy, Manny and myself. It was a cold early morning when we all arrived at Encanto Park. I was looking forward to this day all week but as I unloaded my bike from the truck I knew that feeling of excitement was not going to last. Excited about getting to try out my new American Classic 420s with Michelin Pro Race 3 tires and my new Assos bib shorts, but nervous about what this 12 hour ride we are about to venture on will do to my body. My mind was eager but my 50 year old body was saying, ‘you know you’ll bonk, it’s just a matter of when’.
We rolled out of Encanto at around 0630. It was still dark and our headlights were on. Along the trail our lights reflected against the eyes of two coyotes that crossed the trail in front of us. They too are regulars on the trail. I always see them in the mornings that I ride the trail. Mandy asked if I had names for them. I pondered about this for a minute but they will remain nameless for now.
The sun started to come up as we trekked up Azusa canyon. Even at that time there was already some traffic going up Hwy 39. It appears the conditions were right for off-roading as I noticed several lifted 4x4 trucks pass us along the highway. Half way up it started to get warm and we decided to shed some of our layered clothing. It appears it was going to be a warm day. Hopefully the wind remains calm the rest of the day. We continued on to East Fork then turned around to meet more Adobos at Encanto. 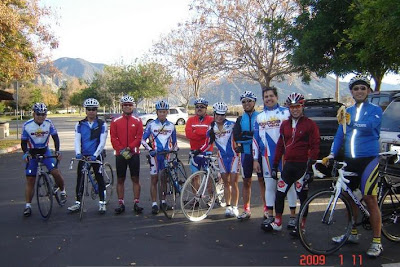 Francis, Pete, Ricky, Felix, Louie and Jessie were waiting for us when we got back to the park. Of course, we are again lucky and appreciative to have our dedicated SAG, videographer and photographer, Juliet Agrezor accompany us on this Adobo venture. I was looking /hoping for a long flat ride back and forth to the beach, but with a support vehicle, this was not to be the case. It was going to be a long day in the mountains. The route was Encanto to Sierra Madre to GMR to East Fork, up Hwy 39 towards Crystal Lake. 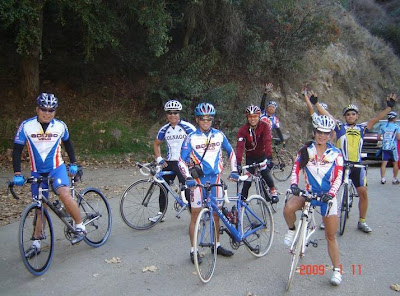 We proceeded on to Sierra Madre at a relaxed pace except for Jessie who was doing his accordion pace, repeatedly gapping the group then stopping to take videos/photos as we pass by. As usual, the group stayed together until the base of GMR where we took a short break. This is where I typically strategize what my pace would be climbing GMR. I’ve been having lower back problems lately and with 9 hours of riding to go, this was going to be a slower pace than usual for me. I watched the faster riders slowly pull away from me as we continued up GMR. Felix was ahead of me and I kept pace with him, keeping him in sight for half the climb. Kuya Ricky and Francis were just right behind me. Francis switched gears and started to climb at a faster pace quickly gapping Ricky and I. Knowing there was no way we were going to keep up, Kuya Ricky and I had our own cat and mouse game the rest of the way up. After a refueling stop at the top of GMR, it was a quick descend down Little GMR to Camp Williams for a quick bathroom break and then on to East Fork.
We regrouped at the junction of Hwy 39 and East Fork, and then continued on towards Crystal Lake. Francis was pacing Ricky and I on the climb and giving advice on what to do and expect on the Death Valley double century. Plenty of good information was being shared. We got to the first gate, which was closed to automobiles, so no SAG support from here on. 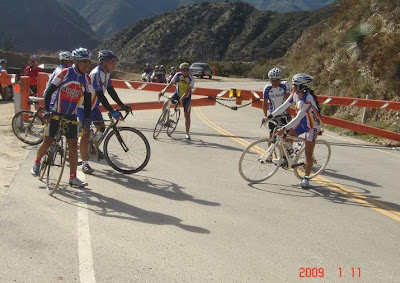 Ricky and Jessie rode back to Encanto while the rest of us continued on to the second gate. We had a short regroup then the long descend back to Encanto. We had Subway lunch at the park courtesy of Pete and kuya Ricky. I had not been eating anything but Gu the whole ride so I devoured almost a whole footlong sandwich in no time. Manny had a whole vegetarian sandwich, which I think was just a loaf of bread and some tomatoes.
After lunch we said goodbye to the rest of the group and Rosalie, Manny and I continued with our ride. We tried to talk Ricky into joining us but to no avail. Collectively, we decided we had enough climbing that day and the next 5 hours will be mostly flat. We headed down the trail to Santa Fe dam then crossed over to the SGRT. We kept an easy 17-18 mph pace all the way to the golf course where we witnessed some home boy getting arrested and put in the back of the cop car while his friend on another car watched the whole thing go down. We realized that SGRT may not exactly be the safest place to be riding a bike after dark so we decided to head back while we still had daylight and do the rest of our ride up Sierra Madre. The Subway sandwiches we had for lunch were starting to take effect as we all felt re-energized. I’ve been drafting behind someone pretty much the whole day and so decided to take my turn up front a bit. Next thing I know we were back at the dam. Made a mental note to myself – Subway sandwiches work better than Gu.
I’ve ridden on the dam countless of times before but mostly in the morning. Our late afternoon ride brings a whole different experience. It was a clear day and we can see the radio towers up Mt Wilson and the snow capped Mt Baldy to the north. To the west, we watched the sun slowly set right above PV, blanketing the horizon with an orange hue. One by one the city lights came on, providing yet a different picture of the landscape. We decided to keep riding up on the dam and just enjoy the changing scenery. It felt like we could keep riding forever.
Once the sun had fully set, the temperature dropped considerably. We stopped for a few minutes to put our arm warmers and vests back on, and to check and adjust our lights. Again, a feeling of ambivalence came over me, excited about doing my first night ride but weary of the dangers that come with it. I’ve read about bikers getting mugged on the trail during daytime. Nighttime provides even more of an opportunity for the criminal element to inflict their hurt on unsuspecting riders. The two coyotes we saw earlier had no interest in us then. I know they’ll again be out by the trail. This is, after all, their home. What will be their disposition this time?
We continued on down the trail only as fast as what our headlights would allow. It was barely six o’clock so we had over 30 minutes more to go. We figure we could ride the trail until it ends at Hwy 39. It was dark and hard to see the bike path even with our lights. Rosalie had the brightest light so she led the way for us. We passed a lone jogger. I thought to myself, not a smart idea buddy. We had just passed the bridge that crosses the river over to Encanto when Rosalie yelled ‘watch out’. An old bike with no wheels was standing on its seat and handlebars right in the middle of the trail, obviously left there to cause a crash and inflict injury. We stopped. I looked around for anything else suspicious. Manny moved to bike off the trail we decided to hightail it out of there. We rode some more around Encanto park and got back to our cars by 6:15. Not quite 12 hours but close enough.
Dinner was at the Green Onion where Francis joined us prior to heading to work. We reminisced about the days ride and planned future training rides. All in all, I felt this was a very good training ride. The expressions on my comrades’ faces during dinner pretty much confirmed this.

Posted by AdoboVelo Wire Service at 9:44 AM